Blood relation is one of the most frequently appearing topics of logical reasoning. It shows the different relations among members of a family. Based on the information, a candidate is required to identify particular family members.

It tests the analytical skills of the students and how they approach a logical problem using a diagram or a pattern. Scoring marks in this topic is easier as compared to other topics in the reasoning section. The only thing, you need to remember is the blood relations in between family members.

Directions: Study the following information carefully and answer the questions given below:

Preet is the sister of only son of Akasa. Pavi is the daughter in law of Sarin. Rahi is the mother of Akasa. Sarin is the grandfather of Taran who is the daughter of Pavi. Namya is the maternal uncle of Gunjan.

How many male members are there in the family?

Following the final solution we can say that there are four male members in the family.

Hence, the correct answer is option B.

We will keep this information mind while solving the puzzle.

Preet is the sister of only son of Akasa.

Rahi is the mother of Akasa.

After using the above hints, we can draw a following blood chart:

Sarin is the grandfather of Taran who is the daughter of Pavi.

Pavi is the daughter in law of Sarin.

After using the given hints, above blood chart can be redrawn as:

Namya is the maternal uncle of Gunjan.

With the help of above hints we can say that Namya is the brother of Pavi and Gunjan is the son of Pavi.

This is a simple question, which involves a step by step connection of relation between members.

You can begin, by picking up a family member, for example, Preet and then establishing his/ her relationship with the other members until every member becomes inter-connected.

Also, do not assume the gender unless it has been specified in the question or it may result in an incorrect answer.

List of Competitive exams where Blood relations form a part of the reasoning ability section:


Blood relations denote any relation in the world which is either by birth or by marriage.

Here’s the list of different relations you need to know so as to solve the questions:

Tips on finding the relationship between two family members:

1) The first step is to choose from the two persons between whom the relationship needs to be established.

To ease the process, between the gender of a male and female, you can use the plus or box sign for the male and negative/minus or the circle sign for the female.

To depict a relation between siblings you can use a ‘——‘, whereas, for a couple, you can use a ‘==‘. This will help you bring in clarity and help solve the questions quickly.

Looking at a picture of a boy, Hemant said, “His mother is the wife of my father’s son. Brothers and sisters I have none.” At whose picture was Hemant looking?

A. His son
B. His cousin
C. His uncle
D. His nephew
E. None of these

Since Hemant has no brother or sister, so he is his father’s only son.

Thus, Hemant’s wife is the boy’s mother or the boy is Hemant’s son.

Hence, the option A is correct.

In comparison to the previous category, these type of questions are quite simple as information about the family members is straightforward. However, these questions may involve more than one family.

Directions: Read the following information carefully and answer the questions given beside.

G is the mother of F, who is the spouse of D. M is the daughter of D, who is the only brother of C. E is the son of G, who is married to H. A is the niece of C, who has no sister. T is the father of D and has no daughter. V is the sister-in-law of F.  G has only two children. M is the granddaughter of O.

How is V related to M?

V is the maternal aunt of M.

Hence option B is correct.

G is the mother of F, who is the spouse of D.

M is the daughter of D, who is the only brother of C.

A is the niece of C, who has no sister.

T is the father of D and has no daughter.

As per first and second hints, it is clear that D is the husband of F.

As per last hint, we can say that C is also male.

V is the sister-in-law of F.

G has only two children.

M is the granddaughter of O.

As per first and second hints, it is clear that V is the wife of E and E is the brother of F.

These type of questions involve, coding of the blood relations and may be represented by various codes such as +/ - / $ / & / @ etc.

Directions: Read the following information carefully and answer the question given below: It's clear from the family tree that L is granddaughter of Q.

Hence, the option A is correct.


The blood relations based puzzle, as the name suggests involves the combination of Blood relations along with seating arrangement.

Students need to combine both the concepts of blood relation and seating arrangement to solve these type of questions.

Directions: Kindly study the following information carefully and answer the question that follows:

In a family of six persons – Anu, Ayushi, Sohan, Ajay, Anupam and Anuj – there are three males and three females. There are two married couples and two persons are unmarried. Each one of them reads different newspapers, viz. Doctor, Engineer, Lawyer, Teacher, Writer and Architect.

Anupam, who works as Engineer, is mother-in-law of Anu, who is wife of Sohan. Ajay is the father of Anuj and he does not read Doctor or Architect. Ayushi works as Writer and is the sister of Anuj, who works as Lawyer. Sohan does not works as Architect.

Who among the following works as doctor?
A. Sohan
B. Ajay
C. Anu
D. Data inadequate
E. None of these 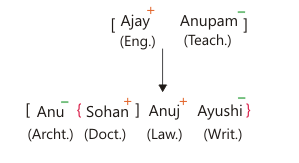 We can clearly observe from the figure that Sohan works as Doctor.

Hence, option A is correct.


We hope this article helps you to understand the concept of Blood Relation. Now you can eaily gain extra marks in Blood Relation within given time.
Regards,
Team Smartkeeda